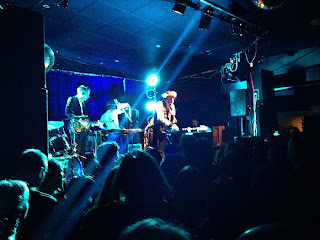 Yes, if you didn't know already Amanda Palmer totally rocks! Supported by the Grand Theft Orchestra (from her latest album "Theatre Is Evil") and some interesting support acts the classic "King's Arms" style show, with a truly eclectic crowd of fans, on Friday 6 September 2013 was totally awesome (to put it in one word)!

Support acts were The Murder Chord (we only arrived as they were finishing so only heard the last track unfortunately), followed by an awesome solo performance by Jherek Bischoff (the bassist from Grand Theft Orchestra).

Next up was an interesting performance by Peter Jefferies, a New Zealand performer I don't think I've heard before - apparently he is currently teaching music in Taranki and hasn't played live for 11+ years! Anyway he is one of Amanda's musical inspirations and muses, and she's been trying to track him down and play with him for years - for this tour she finally managed it! You can certainly see the connection and the influence he's had on Amanda in their piano playing styles!

Once Amanda and GTO took the stage the set list featured a cover of Nirvana's "Smells Like Teen Spirit" which just booted the whole place in the pants and raised the energy levels instantly, and a great cover of The Rocky Horror Picture Show's "There's A Light..." In fact RHPS writer, actor, performer, Richard O'Brien was apparently supposed to be there to guest sing on this song, but unfortunately he had the 'flu and couldn't attend - I think that would have totally capped the night off if he had!  In her review Samantha Beneke talks of "Amanda’s incredible ability to make it seem like we were all just a bunch of friends hanging out in a garage where our mates were jamming. It was the most intimate gig I have ever been to..." and I'd second most of that - between Amanda's presence and the numbers they allowed in for the concert they got the mix of bodies to space pretty right, and most of the night did have a feel of a big crowd of mates partying in someone's garage!

This was a truly awesome, intimate concert, and "Amanda F--king Palmer" so totally rocks!

Read more reviews of the show: