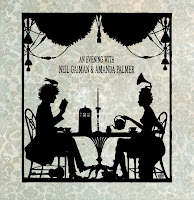 Amanada Palmer has announced the release of a new album (An Evening With Neil Gaiman and Amanda Palmer) with Neil Gaiman. The 40-Track album (equivalent to 3 CDs) is available through Bandcamp (from US$10) and can be downloaded in FLAC (ALAC, MP3, or other formats), and contains a mix of her older material and some new songs, poems, and more.

"Recorded live in 2012, and initially released as a limited edition set to Kickstarter backers, Neil and Amanda now bring the experience to you for your listening pleasure. Enjoy Neil and Amanda performing audience favorites, duets, cover songs, poetry, short stories, and more!"

Well worth a look as Amanda Palmer never disappoints! Don't forget to check out Amanda's Website & Blog.
at 5:00 pm