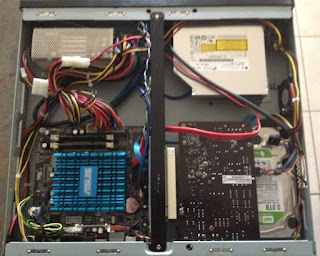 One of the challenges I’ve been having is with heat and the chassis fan (see my previous post). It hasn’t been a show stopper but it’s been a bit annoying and has prevented any hope of running the unit entirely fan-less… However I’ve subsequently done a tidy up and rearrangement of the cabling in the case (see image) which has made quite a big difference. I’ve also got the chassis fan mounted in a new position on the side so it’s pushing external air in and into the centre of the case (i.e. towards the motherboard & processor heat sink) rather than being in the back corner partially obstructed by the hard-disk drive and pushing air across the latter and away from the motherboard.


This has made a big difference and the normal air temp with continuous operation is now sitting around 8ºC to 10ºC lower than it was – it also means when it’s getting a work out (i.e. playing continuously, ripping CDs, and having data dragged to or from it over the network simultaneously it’s peaking much lower than previously as well - i.e. about 8ºC or more below the recommended maximum, previously I was getting within 1ºC or so of that) – which augers well. A friend who has since built an identical unit has also been tinkering and found that disabling some of the unnecessary services (or not enabling them to start with), such as DLNA, the CD Auto-Ripper, Plex, the Bit-Torrent Client, etc, significantly reduces load on the processor, which again helps consistently pull the temperature down a few more degrees. So it’s looking good for potentially getting it to run fan-less permanently in the near future… A third NZ Audiophile with essentially an identical server has confirmed he’s had his running fan-less with no problem…

On a different note I thought I’d summarise the costs to date for this. There was a discussion I was party to recently about someone looking to upgrade their front end (of their Hi-Fi set-up) but having a limited budget and not knowing whether to go the digital route with a DAC (Digital-Analogue Converter), or to stick with just getting a new audiophile CD Player within their budget. Personally I think anyone who invests significant money in audiophile CD Players at this time is crazy – digital is clearly the way to go (unless you are a vinyl aficionado) and buying an expensive new CD Player will only result in buyer’s remorse (or regret) of some description or another in the future (probably sooner rather than later).


For the case you can use a standard case of any type that fits a MiniATX or other appropriate Motherboard if aesthetics or dimensions aren’t important. There’s a saving there of $220 or so ($265 if you have an old existing case you can recycle). You can also go for a smaller HDD initially, a 2TB instead of 3TB WD Caviar Green HDD will save about $100, and the LG Blu-ray drive is optional – you only need it if you want to use the auto-ripping function (you could rip manually on your PC or Laptop then copy the files over) so could exclude it or just get a DVD only drive (so save $170 or ~$90). The SoTM filter is also an optional feature (and I’m not convinced it’s doing anything in my set-up), so $35 can be deducted.

Result: You can build a comparable server from scratch for just NZ$650 (or ~$750 if you put in a slim line SATA DVD drive). The ASUS soundcard could be swapped out for an Async capable USB card (which may be cheaper) if you wish to go the USB rather than s/PDIF route, and of course you could use alternate Motherboards, HDD, etc, that will be even cheaper if noise, or power use, by the server aren’t an issue (e.g. you are putting it in another room or closed cabinet).

A Set-Up With A Limited Budget

So back to our example this would leave our say NZ$2,000 budget with between $825 and $1,400 still to spend on the actual DAC and an appropriate cable to connect it with the server. The cable will only cost a few dollars relatively speaking (i.e. sub-NZ$50) and I’m assuming here of course that whoever was doing this would have an existing network (wired or wi-fi Ethernet) in their house and obviously were replacing a CD Player or similar so had existing amplifier and speakers or such to connect the DAC unit to in lieu of the CD or other Optical Disc player...

While the selection of appliances in NZ is nowhere near the range and qualities of that available to audiophiles in Europe & North America there are still enough viable units available for our purposes – the following is a list that was proposed in a recent discussion:

Alternately the lesser option would be to use a Logitech SqueezeBox Touch (~NZ$400) however this would not compare to the above DACs for quality if outputting analogue. It’s better used as a bridge between server and DAC if needed if the latter two are in different rooms (in which case you don’t need a dedicated server and can stream off your PC or have an external USB drive connected to the Touch directly). If you live in the Apple World then iTunes and an Airport Express are also an alternative option (but not relevant to this discussion as it's debatable the Airport Express will compare for sound quality).

Anyway the point being it’s quite a doable project within such a budget – and most people will be surprised I think with the quality of the result. Listening to music by actually spinning your CDs in an optical player is dead (or rather getting into old age)… Well, as long as you rip to FLAC or ALAC lossless and not one of those dreadful lossy formats like MP3 or AAC of course!