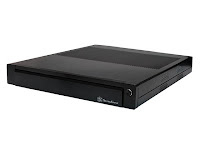 Since my last post there has been a bit of progress, I now have my server running fan less. This just took a little bit more minor tidying inside the case and the removal of a large heat source from directly beneath the server – my Perreaux 350P Power Amp! In fact this has been part of a major revamp of my entire system (as discussed in my The Joys Of Discovering Focal Pro SM9s post), which basically is seeing my entire audio system (apart from my Subwoofer) replaced around the Music Server & my Oppo Blu-ray Player which will be the only components remaining. One benefit of this big change is a lot more space in my rack, eliminating the heat issue alluded to above – the presence of the Perreaux 350P causing a passive build-up of warm air around the server without the presence of the fan. Now that’s gone the unit is happily running fan less.

The next challenge was gapless playback – the one disadvantage of the built in Vortex Player is it can’t do gapless – which can be a bit frustrating when listening to live performances and such like… Having playback ‘stutter’ between tracks is annoying.. A friend came across the process for getting SqueezePlay installed onto the server and using it in place of Vortex Player. I’ve successfully completed this process and it’s up and running well, however a side effect is it’s resampling everything (up or down) to 48kHz, so isn’t providing bit perfect playback. However that will just be a missed setting as my friend has it working correctly and did some additional tweaks, so I’m currently working through the process to see if I’ve missed something. You can read more in the Vortexbox Forum Thread on SqueezePlay – if you try this remember it does have a risk of corrupting your server – so make sure you back up (i.e. tarbal) your Linux O/S first.


A couple of small side effects of installing SqueezePlay is I have found my DLNA service often fails to start successfully on boot up – this isn’t a show stopper and I will eventually fix it with a suitable script or such to start it last after everything else has started if needs that; and it pays not to have the Vortexbox Player service running if not required – if you end up with both it and SqueezePlay playing different tracks simultaneously to the sound (or USB) card it can jam up LMS (Logitech Media Server) – again not a major, but a small trap for young players.

So I'm just working through the above and another side effect I've discovered, all the output being upsampled or downsampled (depending on original sample rate) to 48kHz - this latter will hopefully be rectified by an update of the basic SqueezePlay install package, as I may not have the latest version, so may not be significant.