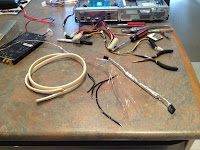 Continuing on from my last post, in August-September I had assembled a second Vortexbox Server, and I then went through and shielded all the cabling in the new server, and all the data cabling in my existing server (I haven't done the power cabling yet as I am contemplating a Linear Power Supply for my server - and if I do so will need to modify the power cables before shielding). I've posted a few images here to give anyone else wanting to have a crack an idea of how to do it just using some basic equipment...

The picture below shows a half-completed SATA data cable - I chose to do the simplest most basic method of shielding, so I did not use heat shrink or anything like that to wrap & insulate the completed cables. Instead I used basic insulation tape. Materials required for this are: 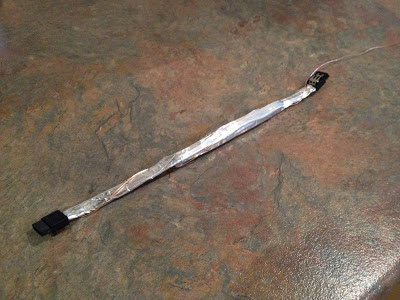 In the photo above you see the SATA data cable has been fully wrapped in a layer of self-adhesive aluminium tape - this provides the basic shielding. It has then had a strand of the copper core from the domestic electrical cable run down it's length with an extra extension at one end to be 'earthed' once in the cable. I have 'wrapped' the copper core in a gentle spiral around the aluminium to make it easier for the next stage - but it doesn't need to be, it can just be run straight along the length of the aluminium on one 'face' (or side) of the SATA cable. The aluminium shielding on the cable may (or probably will) collect stray electrons, so if the server is on for any time, especially prolonged periods, it may become electrically charged, which we don't want (for various reasons), so the copper core strand provides an earth drain for those electrons to escape or dissipate (via the server chassis's earthing). 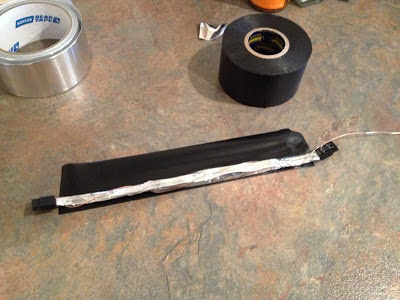 The cable is now wrapped in an outer cover of insulation, as we don't want that aluminium touching anything metallic in the server and potentially shorting something out or causing us to blow a component up! Above I am just wrapping a simple layer of insulation tape around the entire cable (except the plugs), this will also help hold that copper core 'drain' wire in place too. If you are really keen you can do this instead with the heat shrink cable tube (or wrap), but I just did the simple way to avoid needing to muck around with a heat source to shrink the wrap and stuff... The heat shrink is however a much tidier solution and a more durable long-term method (as the insulation tape will loose some of it's adhesion over time as the heat in the server, etc, degrades it's adhesive and softens the tape material). But either solution works fine. 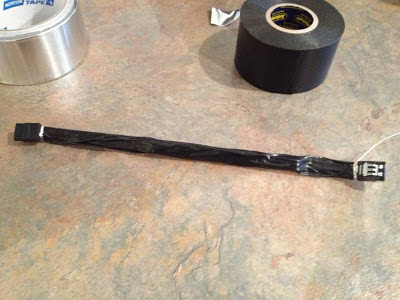 And this is what the completed shielded & insulated cable ends up looking like. Note the copper core 'earth drain' sticking out from under the insulation tape at the right hand end waiting to be secured to the chassis once the cable is installed... 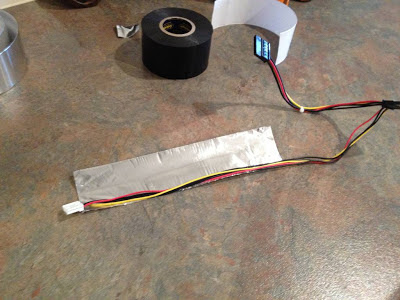 It's also necessary to do your power cables, especially if you have a standard power supply that's installed inside the server case. One of the two server's I was shielding did, so this is the first SATA power cable being done above. As it's a multi-plug cable, and I only need to use one plug in the server, I'm doing it a cunning way to keep it nice and tidy - first I shield only about ¾ of the length of the power cable from the PSU towards the first SATA power plug. 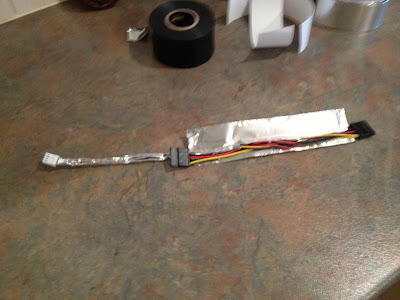 then I lay the second section of cable back along the first so the second SATA power plug is partway along the first section of shielding and I now wrap the length of that cable (effectively re-wrapping about ¼ of the section I originally did) - this results in the whole cable being shielded with the surplus power plug protruding halfway along - and ensures the whole length is shielded. (remember you need to shield the whole cable even though you might only use 1 of the 2 plugs on it - as the whole cable is 'live' when the server is powered on).


As with the data cable above the copper ore earth drain is then wrapped around the length of the power cable, and insulation is then applied as above - again I did this in 2 stages like the aluminium tape so as to cover every millimetre of the latter (and just leave the extra power plug protruding halfway along nicely bundled up and out of the way). 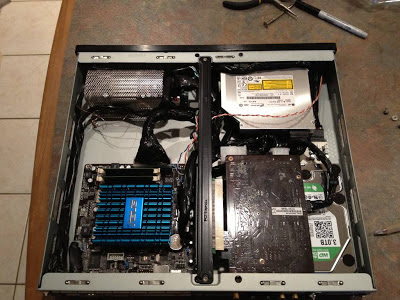 The first server is completed by installing the cables and then taking all the 'earth drain' copper cores and fixing them to the server chassis (which is earthed through the main power supply). If you look in the upper left of this photo you can see several of them secured under a screw & washer in front of the PSU (the box-like object at top left made from a silver grill). More are secured underneath the optical drive (a DVD-RW unit) at the top right, using it's mounting bracket to clamp them to the chassis. Note that I have not bothered to shield & insulate the light command cables from the front panel of the server (the orange & white and blue & white wires visible) - these only carry on/off, activity light, and similar signals, and should not have any serious impact on signal noise in the box. The first server pictured above is based on my server's original config, and features the ASUS Motherboard (utilising the Silverstone case's on-board PSU), and the ASUS Xonar STX card to provide S/PDIF out. 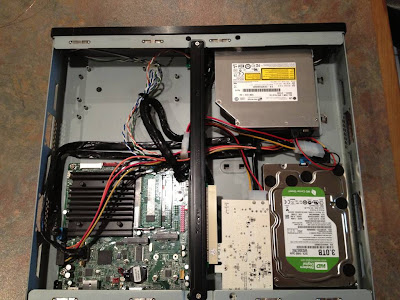 The second sever is then completed the same way - however with one key difference; I haven't shielded & insulated the power cables at this stage as I am contemplating building a linear power supply for this and if that happens the power cables will be replaced... Note this server is a different config with an Intel Motherboard and a SOtM tX USB Card, and a Blu-ray/DVD-RW drive instead of a standard DVD-RW drive. The Intel motherboard is a newer release and has two small advantages over the ASUS one; it has an external PSU (so the internal case PSU is not required - you will see it is removed above) which is better suited for replacement by a LPSU as mentioned above; and it generates a bit less heat (helped partly by the removal of the internal PSU) which is an extra bonus if the server's in a fairly constricted rack with limited airflow around it... This is the server for my main, primary Hi-Fi set up with my Perreaux DP32 and Focal Pro SM9s.

And that's it - all there is to easily shielding and insulating your internal cabling - which should both improve overall sound production (depending on the rest of your system this may be more or less noticeable), and as a side effect should improve the data signal quality providing consistently higher data transfer speeds internally between the HDD and the RAM & Processor (although admittedly this latter benefit is based more on anecdotal experiences rather than hard data).

A Note On SOtM SATA Filters

In previous posts I've referred to the SOtM filters for SATA Hard Drives - I have not run one in my server (again as I am expecting to implement a Linear Power Supply), but had installed one in the new server I built (a 'Revision 3' version of SOtM's SATA filter). To cut a long story short the result was very disappointing, with the detrimental effect on the sound output significantly out-weighing any small benefit that 'might' have been gained from reducing background signal noise. The sound degradation was not immediately obvious in my system (with the Focal SM9's), but in a couple of friends' systems was very apparent, and further examination (including testing by one of those friends' who had time to investigate further for me) identified the SOtM filter as being the cause (i.e. removing it brought a very tangible improvement to the sound). 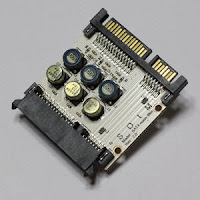 As a result the sound output of the server (running S/PDIF via the ASUS Xonar STX card) was improved significantly by its removal. My friend had also previously not had any positive benefit with an earlier ('Revision 2') filter in his own server, but to be fair no negative effect either, so had removed it as simply superfluous. I also am aware of several similar reports on other forums & blogs, so we are obviously not alone in experiencing the sound degradation (that apparently) can be caused by the SOtM filter. As a result my overall impression is 'Caveat Emptor' (let the buyer beware) as these filters may only be beneficial in limited situations or with specific types of systems (e.g. one's that lack high end detail and/or are bloated or muddy in the midrange, or such like) and I wouldn't recommend everyone bothering with one straight off with a new server build in future - you can easily add one later if you are convinced its required.

Note: I believe there may be a Revision 4 version of the SOtM SATA Noise Filter out now - so there may be some improvement over the Revision 2 & 3 versions on what we have experienced above.

Related Reading: Logitech Clarify Future Of Squeezebox and The Great WAV vs. FLAC Debate and Ethernet vs. USB for Streaming.