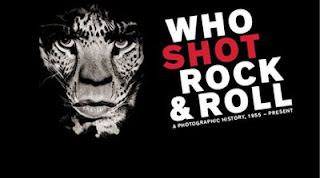 Last weekend I went to see "Who Shot Rock And Roll" (A Photographic History, 1955 - Present) at the Auckland Art Gallery for the second time (having been to see it originally in early December, shortly after it opened here in New Zealand). This is a great exhibition organised by the Brooklyn Museum (and guest curator Gail Buckland) and features "173 photographs of rock, pop and hip hop, captured by the men and women who gave the music its image". The photographers covered include Diane Arbus, Roberta Bayley, Henry Diltz, Godlis, Dennis Hopper, David LaChappelle, Annie Leibovitz, Linda McCartney and Albert Watson.

The exhibition has now closed here in New Zealand (having previously toured the United States & UK after it's 2009 première in Brooklyn) but there is a book of the photographs available through the Auckland Art Gallery Shop for those interested. This is a great exhibition and highly recommended to anyone who gets a chance to see it (if it exhibits again anywhere) - and there are plenty of great reviews on the web for those wanting to know more about it, and there's also a page at Wikipedia.


Organised by the Brooklyn Museum and curated by photographic historian and author Gail Buckland, Who Shot Rock & Roll is the first museum exhibition to acknowledge photographers for their collaborative and creative role in the history of popular music.